LES, a member of the Victoria Police Project Management Support Services Panel, has been selected to develop a design specification and supporting tender brief for the Victoria Police Search & Rescue Diving Support Truck Pod. The pod will be mated to a commercially available flatbed vehicle and will provide storage for dive and associated equipment as well as operational support facilities to the Search & Rescue Dive Team members.

Phase 2 of the project involves the evaluation of opportunities and development of options and associated business case to support funding approval for project implementation.

LES secured a very competitive contract with Klinge to provide the Repair Parts Identification List (RPIL) for the 10ft and 20ft Container Systems. These reliable ruggedized container systems are diesel engine driven, electrical generator powered units that provide high capacity refrigeration under the extreme conditions that they will be employed in use in the Australian Defence Force.

Founded in 1984 as a spin-off of the Transport Refrigeration Equipment department of York International, Klinge has been producing refrigeration units at its manufacturing facilities and headquarters in York, Pennsylvania, USA (with sales offices and workshops in Denmark and Egypt) for over 25 years.

LES have teamed with NOVA Defence to provide Design Acceptance and technical documentation support to the Defence Materiel Organisation (DMO). The contract will run for a 6 month period and provides quality engineering and ILS documentation to Armament Systems Program Office (ARMTSPO). This follows a successful teaming in 2009 that saw Design Acceptance documentation produced for ARMTSPO on products introduced through the rapid acquisition process. 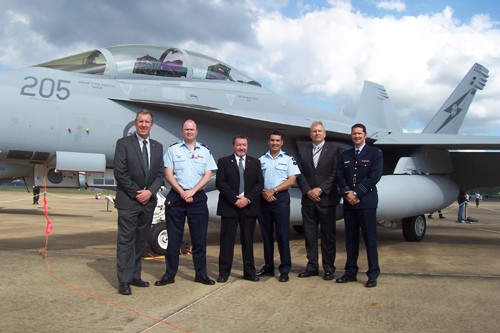 The acceptance draws to a close a very successful project, which culminated in the award of the Australian Defence Magazine/Defence Materiel Organisation's Essington Lewis Trophy for Excellence in Collaboration between the DMO and a SME in 2009, along with two others for Excellence in the Rapid Acquisition Category and Outstanding Achievement in Major Acquisition (see Awards).

The deliveries were made on time and within budget, as were the previous deliveries for the project, which included:

Logistic Engineering Services Pty Ltd (LES) has been given the green light to commence work on Phase 2 of the Wedgetail Airborne Early Warning and Control (AEW&C) Australian Defence Aviation Authorised Spares System (ADAASS). LES was last year awarded a contract by the Airborne Early Warning & Control System Program Office (AEWCSPO) via the Defence Materiel Organisation Support Services (DMOSS) panel, to create the ADAASS data sets for the Wedgetail AEW&C aircraft and successfully delivered Phase 1 of the project on budget and ahead of schedule. Phase 2 is well under way and is scheduled for delivery in June 2010.

LES has won a contract with Veldeman Australia to develop the Illustrated Parts Book (IPB) and Operations Manual in AAP format for the Deployable Aircraft Maintenance and Logistic Support Hanger (DAMALSH). LES was selected because of our knowledge and expertise in developing technical documentation to Defence standards. The DAMALSH is a mobile shelter designed to be deployed and operated world-wide under extreme climatic conditions, incorporating, an aluminium arched frame, cable wind bracing system, and tensioned weatherproof fabric. It measures approx. 30m long X 21m wide x 8m high, with full span "Big Mouth" doors at each end allowing straight through, full width/height access. The shelter does not need a foundation and may be erected on either a "natural" site, or concrete by a team of 8 personnel in approximately 32 hours.

Logistic Engineering Services Pty Ltd (LES) has been awarded a contract by SEM FIRE & RESCUE PTY LTD to supply ILS documentation in support of the Commonwealth acquisition of Rural Fire Tenders. The project, managed by Combat Support Vehicle Systems Program Office (CSVSPO), sees the acquisition by the Commonwealth of fourteen 3,000 Litre Rural Fire Tenders equipped with a range of rescue equipment. LES will supply the ILS elements of the Commonwealth Contract. Services include the drafting of the vehicle Complete Equipment Schedule (CES) complete with the associated Codification Data, various ILS plans including the Integrated Support Plan and the Technical Data Plan and Technical Data List, and the User Handbook for the Fire Fighting System. LES will also design, develop and deliver the Training Package to be delivered to the Defence Fire Fighters in support of vehicle introduction. LES is well placed to complete the project with the recent successful completion of similar ILS packages for the Steelbro Sidelifter Trailer project. 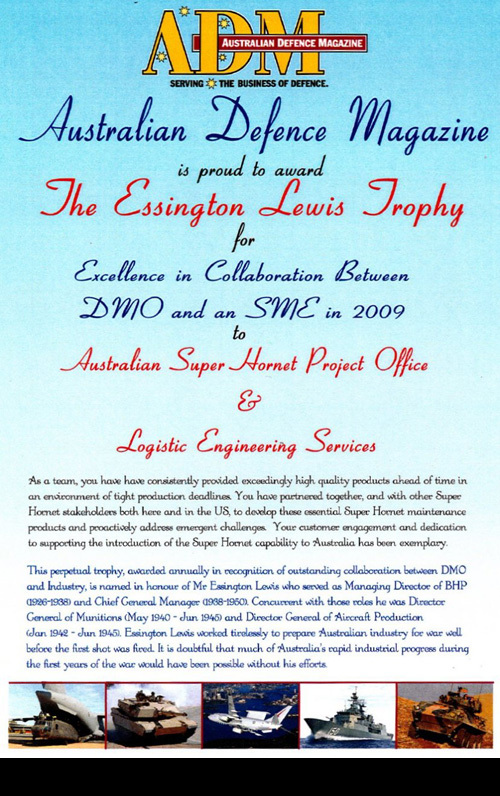 ASHPO and LES win The Essington Lewis Trophy for Excellence in Collaboration between the DMO and a SME in 2009. The citation states:

As a team you have consistently provided exceedingly high quality products ahead of time in an environment of tight production deadlines. You have partnered together, and with other Super Hornet stakeholders both here and in the US, to develop these essential Super Hornet maintenance products and proactively addressed emergent challenges. Your customer engagement and dedication to supporting the introduction of the Super Hornet capability to Australia has been exemplary.

LES and ASHPO were also awarded The 2009 DMO/Industry Team of the Year Award for Excellence in the Rapid Acquisition Category. The citation states:

For your rapid development of the Super Hornet Logistic Support Analysis database and associated maintenance documentation including Technical Maintenance Plans, Planned Servicing Schedules, authorised spares listings and the initial loading of the Air Force's Computer Aided Maintenance Management System. Your outstanding efforts have ensured that Air Force will be able to maintain the new fleet of Super Hornet aircraft upon their introduction into service in March 2010.

In addition they jointly received The 2009 DMO/Industry Team of the Year Award for Outstanding Achievement in Major Acquisition. The citation states:

For bringing that magic 'X' factor to the implementation of this very significant project at an extraordinary pace. Key to the timely introduction of the Super Hornet aircraft into ADF service has been the partnership forged between you. That extraordinary partnership featured a structured and collaborative approach, a focus on risk management, and above all, a focus on timely outcomes. The ability of the RAAF to operate the fleet of Super Hornet aircraft on arrival in Australia on the 23 March 2010 will be in large part due to the quality of the collaboration between you.

LES would like to take this opportunity to thank ASHPO for actively contributing to the environment that forged such a successful and on-going partnership, and the ADM and DMO for the recognition of our joint efforts during 2009.

When you are looking for answers to management, maintenance, engineering, logistics or training problems that need reliable, fast and effective solutions, contact the professional staff at LES.